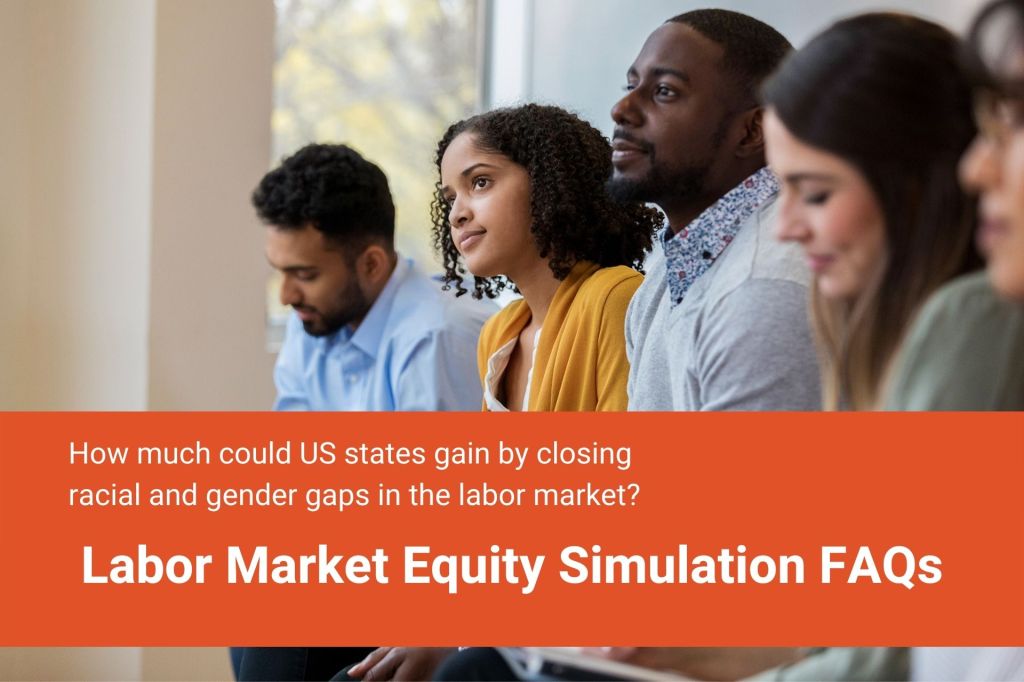 While answers to many common questions can be found in our detailed methods, here are additional responses to questions you may have as you explore the Labor Market Equity Simulation.

How do racial and gender gaps relate to the Federal Reserve’s mission?

Racial and gender equity are directly connected to the Fed’s full employment mandate and mission to promote a healthy economy. Racial and gender-based inequities translate into real economic losses by making it difficult for individuals to realize their full economic potential. This simulation emphasizes the benefits that could accrue for state economies by closing the gaps.

How should I interpret and use this GDP number? What does it mean for my state? Can I cite this number in a report?

The state-level simulated gross domestic product (GDP) figures represent the potential economic benefit from closing racial and/or gender gaps in the labor market. Increased GDP translates to a host of economic and social benefits for communities, including increased tax revenue and homeownership as well as more stable consumer spending. In other words, closing these gaps benefits everyone in the state—not only members of historically marginalized groups. When citing your state’s simulated GDP gain in a report, please be aware of the caveats as listed in our detailed methods.

A zero-sum game is a situation in which one group’s gains come from another group’s losses. One way to think about this is the idea of “economic pie.” If my slice is bigger, yours gets smaller. But the tool offers a different possibility: the pie can grow and create a more equitable distribution, which benefits everyone. Simulated GDP gains for each state and Washington DC translate into widespread economic and social benefits, shared prosperity, and a more inclusive economy, thereby reflecting that closing the gaps is not a zero-sum game but rather yields results that would be beneficial for everyone.

It looks like the gender gaps are larger than the racial gaps. Why are they bigger? Does this mean that we should prioritize closing gender gaps?

This is primarily due to the underlying demographic composition of a state. In states where there is not as much racial diversity, closing racial gaps will yield smaller changes in GDP, simply because it is a smaller number of people. However, this does not suggest that gender gaps should be prioritized at the expense of racial gaps. To realize the potential economic gains identified in this simulation, it is important for communities and policymakers to focus on closing both racial and gender gaps.

What if I want to know the estimated gain to GDP for the country as a whole?

The Federal Reserve Bank of San Francisco has a working paper which estimated the national economic gains from racial and gender equity. Gains to equalizing labor market opportunities and returns were estimated at $2.6 trillion dollars in 2019.

Why does this simulation have only state-level geographies? Can I do a more granular geographic analysis?

In order to provide nationwide estimates of average hourly earnings, employment-to-population ratio, average hours worked per week, and educational attainment for each racial group, aggregating at the state level was necessary for an adequate sample size. It would be possible to do a more granular geographic analysis for certain areas. However, researchers should ensure their sample is large enough for each racial group in their geography of interest before applying the methods used here.

I noticed that the simulated GDP does not match GDP numbers reported in the news and elsewhere. Why is that?

Aggregate output in the economy is a function of physical capital, labor input, and aggregate productivity. We simulate part of the labor component of gross domestic product (GDP) for each state. As a result, our simulated GDP will be lower than the reported GDP of a given state because it only represents one component of the total GDP. We provide these GDP estimates to give context for simulated gains.

What does it mean that this simulation is a thought experiment?

We refer to the simulation as a thought experiment for a few reasons. First, we aggregate 15 years of data to estimate an average annual change in part of the labor component of gross domestic product (GDP) over that time period. However, that estimate is not intended to reflect the change in GDP in any one year, and it is not a forecast of what will happen in the future. Additionally, we assume that the labor market measures of the floor groups (men for gender gaps, whites for racial gaps, and white men for racial and gender gaps) do not change after other groups have been brought to the same levels. In the real world, factors such as distribution of job functions and wages, child care availability, transportation, division of household responsibilities, and personal preferences would likely affect these labor market dynamics.

Why shouldn’t I make state comparisons of simulated GDP?

The change in gross domestic product (GDP) simulated by our tool reflects a state’s underlying population and unique demographic composition. For example, a state with a smaller population of people of color will likely see a smaller increase in GDP by closing racial gaps compared to a state with a larger population. This does not exclusively reflect the gaps themselves but rather the sizes of the groups experiencing the gaps. As a result, comparing results across states is not advised.

What other factors contribute to these gaps?

A number of intersecting factors contribute to these gaps, from differences in neighborhood conditions, housing quality, educational opportunities, health outcomes, experiences of discrimination in hiring and in the workplace, child care availability, and others. While we estimate a possible outcome from closing labor market gaps, the simulation does not speak to the broader array of factors that are contributing to them. Many of the Federal Reserve Banks have done research on contributors to racial gaps throughout the economy, several of which are highlighted as part of the Racism in the Economy series.

I have a question about the simulation. Who can I ask?