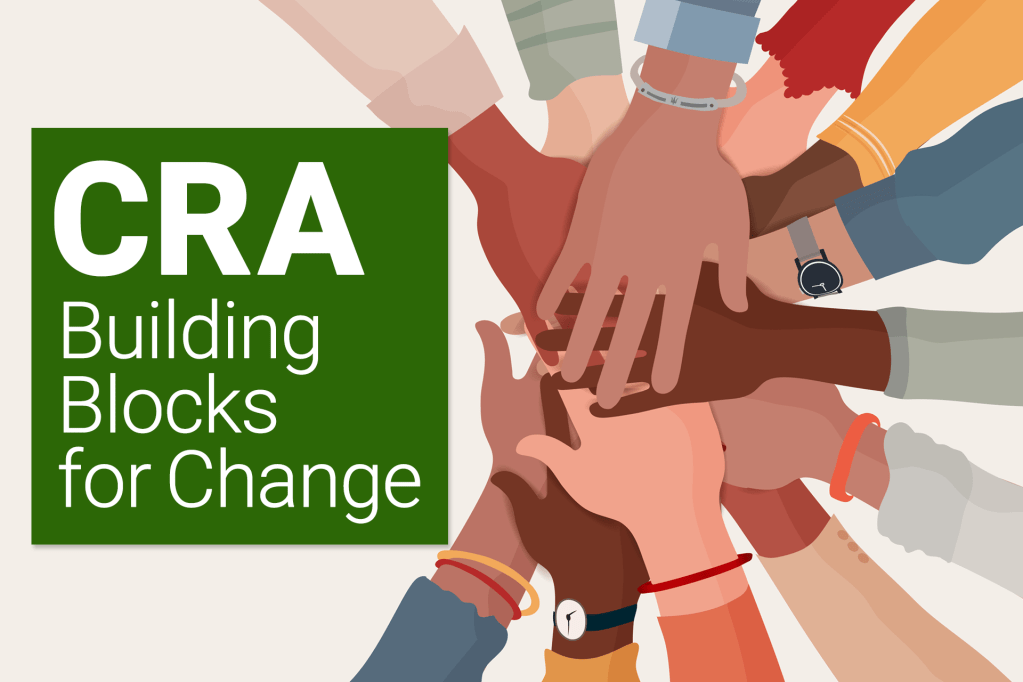 The Community Reinvestment Act (CRA) can hold banks more accountable to the needs of their communities. Congress passed the CRA in 1977 in response to redlining, the discriminatory pattern of denying credit based solely on the ethnic or racial composition of certain neighborhoods or communities, despite residents being creditworthy borrowers.

CRA made redlining illegal. But for decades prior to CRA’s passage, redlining was a practice explicitly encouraged by federal policy. This led to measurable disparities in economic outcomes for residents of redlined neighborhoods, disparities that persist to this day. For example, people from formerly redlined neighborhoods born in the 1970s and 1980s experienced a wide range of economic consequences of the practice, such as lower rates of homeownership and lower household income. More recently, residents from many of the same neighborhoods have suffered higher rates of COVID-19 complications including hospitalizations and death.

CRA: Building Blocks for Change is a series exploring how the Community Reinvestment Act has influenced community investment and the Federal Reserve’s efforts to modernize CRA.

The CRA offers one tool for lenders to play a role in charting a different future for LMI neighborhoods. At its core, the CRA encourages banks to distribute their resources more equitably to traditionally underserved segments of the community. These efforts are then evaluated by the Fed and other regulators, who conduct performance evaluations and assign CRA ratings—ratings that are publicly available—to each bank, detailing their efforts to support the financial needs of those living and working in its geographically defined assessment areas.

How does the regulation do this? The CRA encourages banks to

1. Connect with their neighbors.

CRA evaluators collect economic and demographic data and interview community contacts in the assessment area to gain a better understanding of specific local circumstances that impact lending, or lack thereof. Any member of the public can offer comments on an institution’s performance; the bank is required to maintain a public file, including these comments.

Banks can improve their CRA evaluation by volunteering their expertise in community projects such as financial literacy or serving on a loan committee of a local nonprofit lender.

A bank may need to think beyond its standard financial-service offerings in order to meet community needs in its assessment area. It could, for example, partner with targeted lenders like community development financial institutions (CDFIs). Some regional Federal Reserve Banks host events, like Investment Connection workshops, that bring together lenders keen to invest in community projects and the organizations seeking such funding.

For more information on CRA ratings and banks’ performance evaluations, visit the Federal Reserve Board of Governors.

This post originally published on July 15, 2021. It was last updated May 11, 2022 to include information about the Federal Reserve Board, OCC, and FDIC jointly releasing a Notice of Proposed Rulemaking (NPR).